Ancaster, Canada – BattleGoat Studios is delighted to announce the development of their upcoming Real Time Geopolitical Strategy/Wargame, Supreme Ruler The Great War.  BattleGoat’s Lead Programmer and Co-Founder George Geczy commented, “Supreme Ruler The Great War adds a new era to the franchise, building upon a game system which has evolved over more than a decade. The combat, diplomatic and economic systems developed for the series continue to offer a unique strategy experience, one which has always been well suited to global conflicts. The First World War remains a topic of great interest to historians and gamers alike, although few games model the strategic challenges that the great powers faced during that era. Adding a World War I title to the series fills a gap in both the franchise and within the PC strategy genre.”

Game Designer and Project Lead Christian Latour added, “Since completion of Supreme Ruler Ultimate, the community has continued to ask if we’ll be developing more content. Most players wanted us to go further back in history, and the First World War remained the most popular request. The scope of an entirely new era goes beyond adding another DLC to one of the existing games, it fits best as its own title within the franchise. Having developed the later eras already, we are able to add the earlier time frame and flow seamlessly into the gameplay experiences for which the Supreme Ruler titles are so well known. With the required development tools and an experienced team in house, we know that we can build the World War I strategy game fans have been asking for.”

About Supreme Ruler The Great War

Expanding on sixteen years of development on the Supreme Ruler series of Real Time Geo-Political Military Strategy Games for PC and Mac.  Supreme Ruler The Great War brings players back to 1914, to a world that has little understanding of the devastation that will be unleashed as long-time alliances and animosities drive ever-growing conflicts. Whether leading a major power or a minor nation, players can experience the tensions of a world descending into chaos. Campaigns follow paths similar to historical events while allowing players control of their own destiny, with the opportunity to change those events and chart their own course.  As well, the ever popular sandbox mode allows players to customize their gaming experience by picking any nation and choosing their own preferred Victory Condition. With the further option of multiplayer matches, Supreme Ruler The Great War provides incredible amounts of replayability.

– World War I Campaigns for various major powers from the era.

– Take Control of any Nation in Sandbox Mode and impact the outcome of the conflict.

– The butterfly effect… Influence the timeline and outcome of thousands of historical events.

– Use Diplomacy, Trade, Espionage, and Intimidation to influence the policies of other nations.

– Guide your Nation through the first war waged on a global scale.

– Modernize your economy to support whatever social and military policies you choose.

– Sophisticated Real-Time Strategic and Tactical Control of your Military Forces.

– Detailed historically-accurate Armies down to the Battalion level.

– Choose your level of control.  Make all decisions or use your Cabinet Ministers to help.

– Up to 16 players in Multiplayer over local network or Internet. 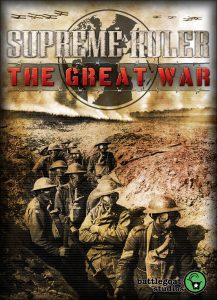